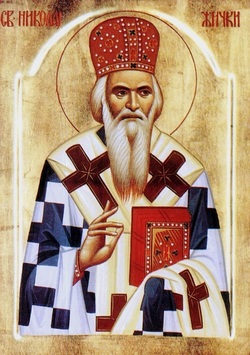 Saint Nicholas was recognized as a Saint long before the Roman Catholic Church began regularizing canonization procedures in the late 10th century (at that time local bishop canonized saints; in the late 1100s canonization in the Roman Catholic Church became the responsibility of the Pope) . In fact, Saint Nicholas' sainthood pre-dates considerably the 1054 schism between the Eastern and Western churches. Though many people seem to think the Roman Catholic Church is definitive when it comes to determining saints' status, Orthodox, Anglicans and others have their own standards for recognizing and commemorating saints.
Therefore, St. Nicholas does not have a specific date for which he was canonized.  Instead, records show a gradual spread of reverence until stories of him became widespread and he was recognized everywhere.
Powered by